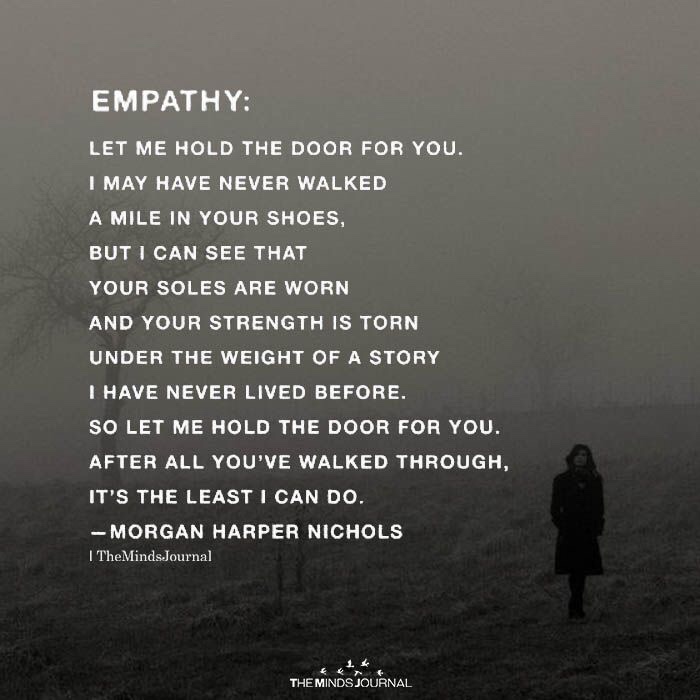 Until recently, I had always mixed up sympathy and empathy. I am a Nigerian and we have very emotive ways of showing our emotions and sorrow for others.You only need to see someone a funeral ( who hardly knew the person who died) wailing at the loudest decibel to understand what I am talking about. We even have accepted sounds like ‘eeyah’ to convey the sorrow we are feeling.

In the last couple of years though I began to observe that pity or sympathy can be detached . I started being more intentional both as a result of my faith and also general introspection and realised that both emotions (though similar) are not the same.

The dictionary definition of sympathy I found states that it is feeling compassion, sorrow, or pity for the hardships that another person encounters

Empathy on the other hand  is the capacity to understand or feel what another person is experiencing from within their frame of reference, that is, the capacity to place oneself in another’s position.

So while having pity is great, the ability to go further to picture yourself in that person’s actual position is one that we all struggle with. We can be sad at the washed up or malnourished child on the TV, but the emotion begins to take on a different dimension, if you could see either yourself or your child in a similar situation.

I  love learning/reading about Martin Luther King ( currently reading one of his books) and this saying really resonated with me regarding this subject;

I think MLK was referring to the fact that can pity can sometimes be impersonal or perfunctory.I am very passionate about giving back as I believe that the resources,gifts, privileges, talents, skills  that we have  are not just for us. I know that we are all called  to give back and make our little corner or the world at large a better place. Sometimes though, I find that giving back motivated by solely pity allows for charity or altruism that is paternalistic. In simpler words, sometimes the charity or giving back is from a place of superiority with a dose of condescension. It allows us have a saviour/hero complex and sometimes makes us believe that we have the best answers and know what is best for whoever it is we are helping.

A practical example I can think of is when people automatically assume that the only thing/help that a homeless person needs is food. You find people saying with authority that the only  thing that they can ever give a homeless person is food. And I get it because I also used to say that. My main concern always used to be ‘ I don’t want them using my money to buy drugs or alcohol’. But as a human being just like me, I started asking myself if the only form of sustenance I need in life is food? Man shall not live by bread alone and all.

Yes I might be privileged not to be/ have been homeless but what right do I have to think that the only help that the man/woman on the street  corner deserves is food? What if no one has actually held a conversation or noticed him/her in weeks? Or even just smiled and acknowledged his/her humanity? And this is not in anyway denying that some homeless people are alcoholics or drug addicts. It just means that despite that struggle, there still is a human being in there somewhere. So even  though my motivation is compassion when I insist that the only thing I can give is food, I have decided that I am better( since I am not an addict) and because of that I definitely know what their needs and that can only be food.

So as MLK said earlier just writing a check,dropping a coin often just helps us feel better about ourselves.Empathy requires going a bit further, as its not often not possible to be detached from the object or person we are empathising with. To effectively empathise with another human being , I need to have at least some insight into who he/she is,what he is doing or trying to do and sometimes why they are doing it. Their struggles might be different from mine but ultimately we are all Gods image bearers.

Below are a couple of tips that can help with practising empathy:

An example of this; when I was growing up in Nigeria,people often decided to up-skill their domestic help. This was such a noble thing and lends itself to the teach a man to fish theory. However some of them automatically assumed what skills they felt would be best .These were often a tailor, hair dresser etc for the females, a mechanic, plumber or electrician for the males. The assumption being that as they are domestic help, the only skills that they could possibly be good at are the vocational skills.

Now this is not to say that these skills are not important ( they really are) but my point was more about the assumption that these skills were always the right fit. Maybe if asked, some could have said, I would rather learn how to bake as I have an interest in cooking. Or I want to learn building.

For this reason I think that charities should ALWAYS work with people who are already in the community ( living, working, schooling) as they better understand what is needed and what would work best for the beneficiaries.  I think recognising a persons ability to know themselves is a way you can show that you see them and accord them the dignity that all humans deserve.

I hope that this somehow resonates with you .The world definitely requires more empathy. I am thankful that you have taken the time to read my  random musings.Please do comment, share and like.

Have a lovely Tuesday and week ahead.

One thought on “Empathy..”